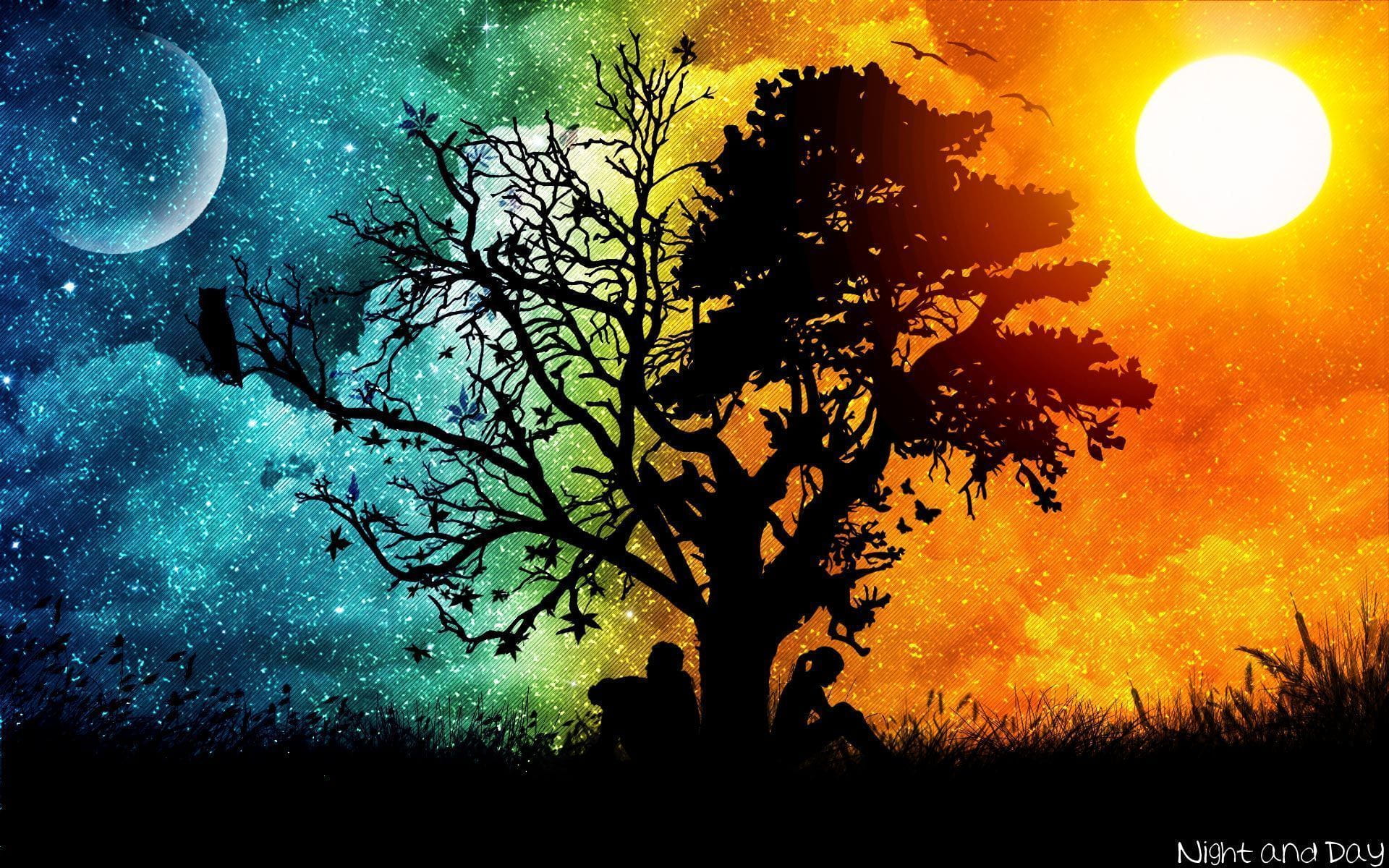 The biological clock is one of the most self perceived physiological mechanisms, sensitive to our lifestyle and ageing processes. An ancestral system that governs the rhythm of our body and that we must know and respect.

Those who travel for business by crossing different time zones or have taken a vacation on another continent have already experienced it: our organism has its own habits (the sleep/wake cycle, the hunger stimulus, etc. ..) and it requires time to re-sync with the new times. Actually, you don’t have to travel for experiencing it, it is enough looking at our grandparents or parents to realize that our body has its own rhythms and these change as we age. This set of rhythms is called the Circadian Cycle and we are going to see that it is one of the most important and fascinating systems of our organism, for its role on our metabolism and on the onset of age-related chronic diseases.

Circadian comes from Latin and means “daily”. Our organism regulates a series of activities, mainly hormonal, on the basis of a daily rhythm marked like a clock. its goal is  “efficiency”: to anticipate and prepare our body to a series of chemical reactions useful for its optimal functioning. All mammals are subject to circadian rhythms, which provide an adaptive mechanism to coordinate cellular processes, physiological functions and behaviors that are governed in the 24 hours of the day, from the alternation of light and dark. This is all punctuated by the hormonal system. The hormonal (endocrine) system is one of the most relavant “data transmission” systems in our organism: it has the role of communicating to specific apparatuses and organs when performing a specific metabolic activity, stimulating its biochemical trigger and preparing the receiving physiological apparatus to activity reception. 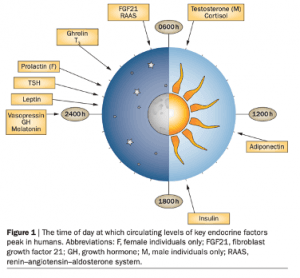 We will see that this complex system, regulated like a clock, can be altered in the course of life, triggering metabolic degeneration with important side effects, which can however be effectively countered by putting the system back in “sync”.

The circadian system is made up of exogenous stimuli (scientifically called Zeitgeber) and an endogenous system called “circadian clocks“. These biological clocks work at the cellular level and allow a cell, like an organ, to perceive time over the course of a day, modulating certain activities. Researches show that between 7 and 13% of the cell’s genetic activity is governed by this time-savvy  system, thank to a category of “clock genes” able to modulate the expression of other key genes. Circadian clocks are grouped into 2 families: a central clock, a sort of conductor that keeps time, and a series of peripheral clocks present in all organs, getting them partially independent from the central structure. We will see that the lack of “synchrony” between these clocks can have important consequences on our health. The central clock is located in the Hypothalamus and scientifically is called Suprachiasmatic Nucleus (NSC). To understand how it works we have to figure out a command center that sends an order for specific hormone production: to increase or decrease its body concentration, and accelerate or slow down all those metabolic reactions associated with this specific hormone 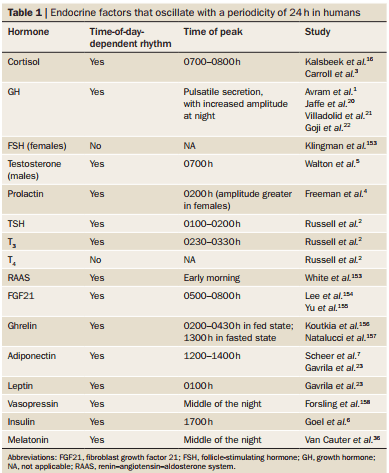 The peripheral clocks, active in the various tissues and organs of our body, follow their own rhythm but they must be in sync with the central clock, otherwise major problems are generated. In fact, it has been demonstrated that the loss of synchrony between central and peripheral clocks have significant impacts on the immune system.

The stimuli of our circadian clock (Zeitberg)

Our biological clock has the light as its first stimulus: the night/day alternation triggers a very important sequence of events. The second stimulus is the feeding time: the availability of certain nutrients, as well as their deprivation, stimulates certain “timed” processes. The third stimulus is the physical/cognitive activity: both these activities engages the biological clock because the energetic metabolic processes related to them also have a natural rhythm. Therefore, behaviors and personal habits anomalies have relevant impacts on the central clock, that will try to match them by re-organizing its cycles but also risking “desynchronization” with the peripheral clocks. Frequent travel between different time zones, changing work shifts, wilds nights, excessive eating in certain time slots provide “unforeseen” stimuli to our central biological clock, which tries to re-organize itself to ensure the correct sequence of organic stimuli to match the new stimuli; unfortunately, peripheral biological clocks risk misalignment because they do not have this agility, making the different systems work asynchronously.

If light is the first stimulus, a correct exposure should guarantee that no alterations are triggered except for the behaviors mentioned above, unfortunately this is not the case. Light is “perceived” by our organism through the ocular receptors of the retina; this capacity is reduced by 1% for each year after 18. A person of 65 years has 45% less ability to receive light than a 20 year old. Cataract surgery has been shown to impact on the quality of the sleep-wake cycle, testifying to the close correlation between receptors and the circadian cycle. This alteration has a number of consequences because the hormonal cycle is reduced in size (hormones are less concentrated) and cycles are shortened, reflecting on sleep disorders and the duration/quality of sleep: a person of 68 years wakes up on average 2 hours earlier than one of 23, with a lighter sleep and a lower number of REM phases (deep sleep phase). This affects the fact that people with age become “early risers”, showing a cognitive efficiency similar to a young brain at the beginning of the day, but which quickly loses its brilliance during the course of the same. 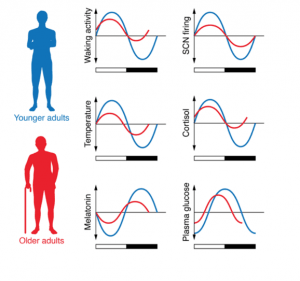 Body temperature (see illustration above), which fluctuates significantly in young people, lowering in the early evening and peaking in the early morning, becomes more constant throughout the day. Some hormones (Melatonin and Cortisol) are reduced in concentration and magnitude from the age of 30, as well as certain metabolic (insulinHormone produced by Langerhans island cells of the pancreas. It stimulates the entry of glucose into the cells, subtracting it from the blood and thus lowering blood sugar. It induces the use of glucose both to produce energy and for the synthesis of glycogen and fats. cycle, lipid metabolism and redox state) and inflammatory balances are deregulated due to the reduced action of the “gene-clock” in governing the sensitive component of gene activity and the de-synchronization of the central clock with the peripheral ones. Somehow the chrono-sensitive hormonal package (see table) is altered and with it, the associated metabolic and immune balances. Another time sensitive process is NAD, the enzymatic pathway essential for cellular activity and at the heart of the physiological aging process, as demonstrated by studies at Harvard Medical School. SIRT1, one of the longevity genes that governs NADNAD (Nicotinamide adenindinucleotide ) is a co-enzyme essential to the metabolism of the cell, intervening in the activity of more than 200 enzyme proteins that govern the energy process of the cell itself. With age, one becomes deficient in this co-enzyme by altering cell catabolism. expression, appears to be directly correlated with the expression of clock genes, in a cause-and-effect relationship yet to be clarified.

This “time sensitive” dimension of our physiological functioning is still under scientific investigation to a deeper understanding of cause-and-effect relationship. Some evidence has already emerged. Counteracting the sight ageing, especially at the retinal level, reduces the risk of photoreceptor alterations. Counteracting the natural thickening and aging of the tissue can be achieved with proper food supplementation, eye protection from blue light and excessive sun exposure. At the same time it is necessary to avoid those dysmetabolisms (ie. diabetes, hypertension) that trigger eye degeneration. The circadian cycle is closely related to nutritional contents and nutritional rhythm, for their impact on metabolic pathways (Understanding metabolism to eat healthily).  Each metabolic pathway is coupled with a “gene-clock” synchronizing the nutritional sensors activity with key molecules production. Unbalanced diets, from a nutritional point of view,  continuous and non-rhythmic access to food, with prevalence in the evening, create dysfunctions of the circadian cycle related to the onset of chronic diseases. As well as caloric restriction has shown positive effects on the “circadian genes”, thanks to the action on SIRT1 of which we have spoken in the previous paragraph that governs the metabolic pathway AMPK, in fact this longevity gene is activated in the presence of nutritional intake reduction. The more effective caloric restriction solution is the one that mimics fasting, which can take the form of intermittent fasting, time-restricted feeding (TRF) or the milder form of avoiding eating outside the main meals. A very useful rule is that of bringing the nutritional peak as close as possible to the peak of energy consumption. Feeding heavily in the resting period (i.e. evening-night) increases the production and accumulation of fat. It is more difficult to evaluate the effectiveness of hormonal therapies to restore the circadian cycle, since there is a lack of extensive and consistent data on the effectiveness and modulation of hormonal dosage for this purpose. To be remembered that is always hard to find the perfect balance in  hormonal replacement therapies, to avoid unpleasant side-effects. Also the research in the nutraceuticalNutraceutical is a syncratic neologism from "nutrition" and "pharmaceutical" coined by Stephen de Felice in 1989. Nutraceuticals are those nutrients contained in foods that have beneficial effects on health, their effectiveness has been proven by clinical trials. field is developing dietary supplements able to target those metabolic processes and to stimulate sirtuinsSirtuins are proteins expressed by SIRT genes that perform an enzymatic activity, which means they stimulate chemical reactions essential for the body. Their function has been ascertained by several studies, although there still seems to be a lot to know about them. SIRTs in short:
• are proteins with enzymatic properties
• regulate the metabolic processes related to insulin resistance
• have a control over immunity
• have a fundamental role in epigenetics
• are involved in defences against cancer
, to help the regulation of the sleep-wake cycle and hormonal rebalancing.