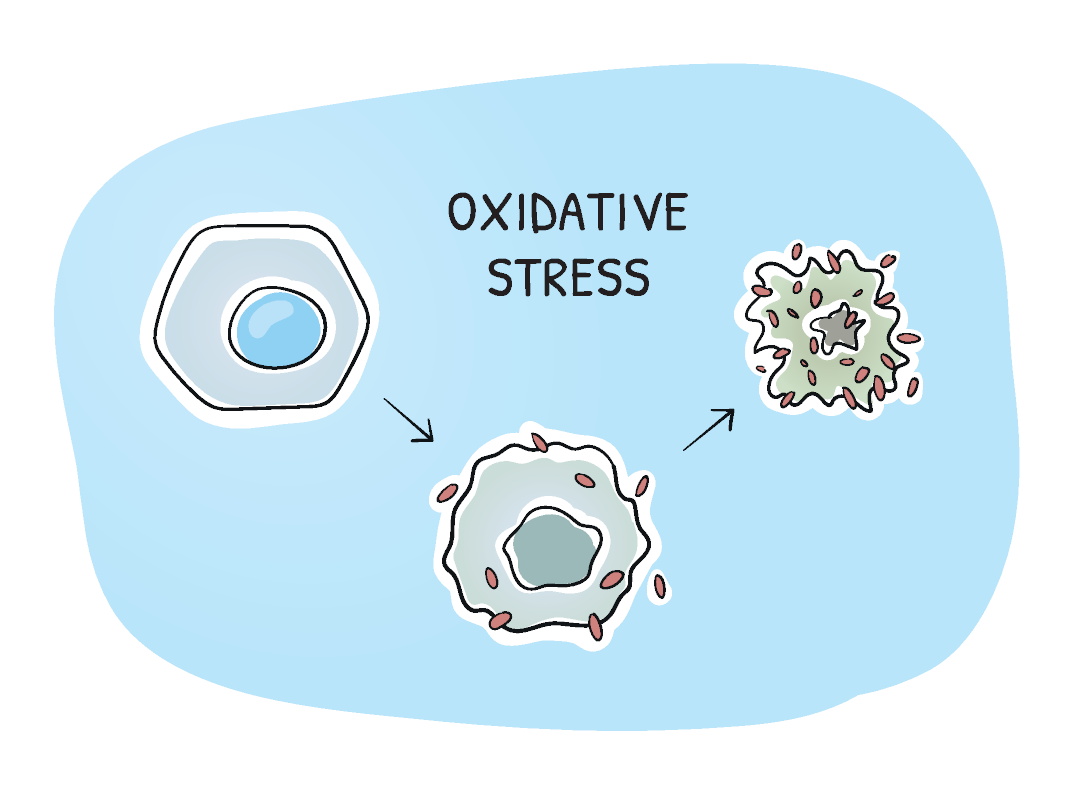 It is one of the most powerful natural antioxidants in our bodies. It plays a central role in tissue production and repair and defends us against numerous diseases. And it plays an important role in physiological processes related to aging.

Glutathione is a molecule which is produced naturally by the liver and is one of the most powerful antioxidants in our body, that is, it is one of those substances that counteract the formation of free radicalsA free radical is a particularly reactive molecule or atom that contains at least one odd electron in its outermost orbital. Because of this chemical characteristic, free radicals are highly unstable and try to return to equilibrium by stealing from the nearby atom the electron needed to equalize its electromagnetic charge. This mechanism gives rise to new unstable molecules, triggering a chain reaction that, if not stopped in time, ends up damaging cellular structures and metabolic processes., which cause damage to molecules and cells. It consists of 3 amino acidsAmino acids are the basic substances that make up proteins. Each protein is characterized by a precise sequence of amino acid "bricks". Some are produced by the body by processing food, others, which the body cannot synthesize, must be taken directly with food. (the building blocks that make up proteins): glutamate, cysteine and glycine. Synthesized mainly in the liver, glutathione is then released and transported to other organs, where it performs critical functions to keep us healthy. It is also found in various foods, especially in certain vegetables, fruits–particularly asparagus, spinach, avocados, peaches, and apples-and in meat. Glutathione is a molecule naturally produced by the liver and is one of the most powerful antioxidants in our body. It is also found in some foods, such as asparagus

Glutathione is closely related to the physiological processes of aging

All roles of glutathione

In addition to its antioxidant effect, glutathione protects us from internal and external attacks. In fact, it is the main mediator of the so-called “detoxification” reactions, by which toxins are eliminated, both those produced by our body and those from outside, such as from drugs and food additives. In addition, glutathione takes part in the regulation of certain cellular processes, including tissue production and repair. In particular, it is involved in gene expression, protein synthesis, cell growth and death, and signal transmission. But it also regulates the immune response, for example in the production of cytokinesCytokines are small proteins produced by the immune system, which bind to specific receptors present on the cell membrane and communicate to the cell a specific set of instructions such as, for example, the stimulus to grow, or to differentiate or even the order to die. They are produced by different types of cells and, once released in the body, induce specific reactions in adjacent cells (paracrine effect), in others far away (endocrine effect) or in those that have created them (autocrine effect).–molecules involved in the inflammatory reaction also associated with Covid-19–and in a mechanism called protein glutathionylation.

Glutathione is the main mediator of “detoxification” reactions, by which toxins, both those produced by our body and those from outside, are eliminated

A lack of glutathione, on the other hand, is associated with oxidative stress, a set of alterations that are among the main enemies of the health of cells and tissues, since they play a central role in their aging and in some cases can lead to real diseases. Indeed, they can contribute to the development of liver disease, Alzheimer’s, Parkinson’s, cancer, diabetes, stroke, and heart attack. Oxidative stress also plays a role in sickle cell anemia, cystic fibrosis, and seizures. Glutathione precursor supplements can potentially keep the “redox state” in balance, that is, improve the balance between substances that promote oxidation and others that counteract it

From deficiency to supplementation

In short, having the right amount of glutathione is essential for being healthy. Yet levels of this substance decline as we age, and according to some research, restoring it through appropriate supplementation with supplements could help improve health, and thus age better. However, there is a small problem with being able to achieve this through supplementation: synthetic forms are poorly bioavailable, that is, the body cannot take advantage of them in its processes, and thus the benefits of external supply are negated. A problem that has been overcome by the new generation of supplements through the “precursor strategy.”

For some time now, various studies have suggested that the administration of precursors, that is, molecules from which glutathione is produced, could be an effective strategy. The main precursors of glutathione are glutamine, cysteine, and glycine, and there are supplements with these (and other) precursors. In addition, precursors appear to be able to keep the “redox state” in balance, that is, to improve the balance between substances that promote oxidation and others that counteract it, which is essential against oxidative stress. The data, to date, provide early indications of the potential of controlled intake, through supplementation, of these compounds.

Along with resveratrolActive ingredient of natural origin with recognized antioxidant capacity (stilbene polyphenol). It is found in plants such as vines and in fruits such as cocoa and blackberries., polydatin, and NAD+, glutathione is one of the so-called “longevity molecules” that SoLongevity research focuses on. On this site you can find an in-depth study dedicated to each molecule.